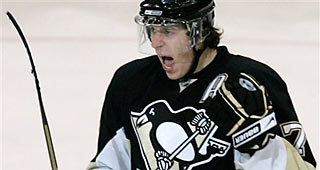 Pittsburgh Penguins general manager Ron Hextall says he wants to find a way to have Evgeni Malkin and Kris Letang stay with the club for the rest of their careers.

"In a perfect world, [Malkin] retires a Penguin," Hextall said Monday. "And I think Tanger's the same."

In a perfect world, anyway.

The NHL in the salary-cap era is hardly that.

If the Hurricanes were looking to send a message after their Game 3 loss, Rangers coach Gerard Gallant cautioned that they might not like the response.

"I wasn't happy with the bulls--- at the end of the game that they initiated," Gallant said after the Rangers' 3-1 win on Sunday that cut Carolina's lead to 2-1 in their series. "We didn't do that when the games were close. They put their guys out. That's fine. If they want to play like that, we've got the guys that can match them."

As the buzzer sounded to end Game 3, Carolina forward Max Domi gave Rangers defenseman Ryan Lindgren a cross-check in New York's zone. Lindgren responded with a slash on Domi. That brought all the players on the ice together, with Lindgren wrestling Domi to the ice in a headlock. 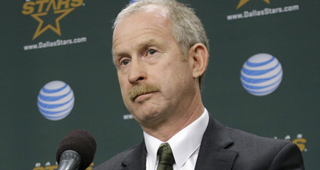 Rick Bowness is stepping aside as Dallas Stars head coach after three seasons, the team announced on Friday.

Bowness, 67, had his two-year contract expire after the Stars were eliminated by the Calgary Flames in seven games in the first round of the Western Conference Playoffs. Assistant coaches Derek Laxdal, John Stevens and Todd Nelson will also not return to the Stars next season.

"After careful consideration with my wife Judy, we feel it's best to step away and allow the organization the opportunity to pursue a different direction at the head coaching position," Bowness said in a statement. "I'd like to thank all the passionate fans and the dedicated staff for their support and hard work in my time here. It has been an honor for me, and my family, to represent the Stars and the city of Dallas." 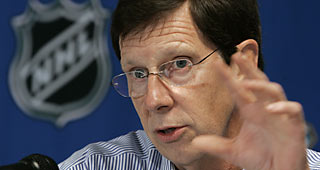 The Nashville Predators have extended the contracts of coach John Hynes and his assistants through the 2023-24 season, trying to build on a season with several individual successes for a franchise that wound up being swept in the playoffs for the first time.

General manager David Poile announced Thursday that Hynes and his assistants have agreed to the extensions. 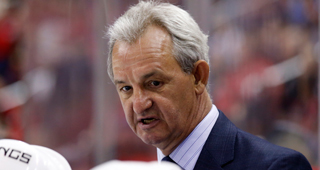 New York Rangers coach Gerard Gallant, Florida Panthers interim coach Andrew Brunette and Calgary Flames coach Darryl Sutter are the finalists for the NHL's Jack Adams Award, given to the head coach who has "contributed the most to his team's success."

The award is voted on by members of the NHL Broadcasters' Association.

Pierre-Edouard Bellemare scored the go-ahead goal early in the third period, Andrei Vasilevskiy remained red-hot with 34 saves and the Lightning topped the Panthers 4-1 in Game 1 of an Eastern Conference semifinal series Tuesday night.

“Look at the saves he makes at the times we need them," Cooper said. “To me, that’s what great goaltenders do and they give you a chance to win a hockey game and that’s what our guy did again tonight.”

The Minnesota Wild stocked their net with a three-time Stanley Cup winner at the trade deadline, fetching Marc-Andre Fleury to form an accomplished goalie tandem with All-Star Cam Talbot down the stretch of the best regular season in franchise history.

The Wild would prefer to keep the pair in place, general manager Bill Guerin said Tuesday.

Rick Bowness has been on an NHL bench for a record 2,562 regular-season games as a head coach or an assistant over nearly four decades. The 67-year-old coach is not ready to be done yet even though he is at the end of his contract with the Dallas Stars.

"The playoffs bring out your passion. ... That excitement and that pressure and everything, that's what we live for," Bowness said Tuesday. "It's tough to walk out of that rink losing in overtime in Game 7, but it also shows you that, yeah, I'm an old man, but still lots of fire left in me."

Two days after the wild-card Stars ended their season in a 3-2 loss at Calgary, and two seasons after he took them to a most unusual Stanley Cup Final, it was unclear if Bowness will be back.

Maple Leafs president Brendan Shanahan said that general manager Kyle Dubas and coach Sheldon Keefe will return next season, despite yet another first-round playoff exit for the team.

The Maple Leafs lost in seven games to the Tampa Bay Lightning, who are chasing their third straight Stanley Cup.

"We're extremely disappointed. We're not going to make any excuses. I thought our players battled hard, I thought that they played well, and they lost to a great hockey team," Shanahan said. "Certainly, as we look forward to next year, there's always going to be new faces. That being said, we will not be making changes just simply for the sake of saying that we made changes."

Patrice Bergeron Say's 'It's Too Early To Make Decision' On Future

Bruce Boudreau Will Return To Canucks Next Season

Flyers Not Bringing Back Mike Yeo As Head Coach

Dustin Brown To Retire After 18-Seasons With Kings