Maple Leafs NHL's Most Valuable At $2B

The Toronto Maple Leafs are the NHL's most valuable team and the only franchise in the league worth $2 billion, according to data compiled by Sportico.

The NHL welcomes the Seattle Kraken as its 32nd team for the 2021-22 season, but according to Sportico, the league's top five most valuable teams are still Original Six franchises. Following the Maple Leafs are the New York Rangers ($1.87 billion), Montreal Canadiens ($1.5 billion), Chicago Blackhawks ($1.36 billion) and Boston Bruins ($1.31 billion).

Seattle made its debut on Sunday night with a 5-3 win over the Vancouver Canucks in the preseason opener for both teams. With Seattle's home arena putting the finishing touches on its construction, the Kraken have taken their first preseason on the road to three junior hockey venues in the state.

Sales, in fact, are the highest in league history for a newly released jersey in its first five days of availability, according to the NHL. Which means Seattle jerseys are doing brisker business than the expansion Vegas Golden Knights did when their jerseys were released to the public in 2017.

The Buffalo Sabres' cross-border rivalry with the Toronto Maple Leafs is heading outdoors.

The Sabres are listed as the home team against the Maple Leafs in the NHL's sixth Heritage Classic -- to be played at Tim Hortons Field, home of the Canadian Football League's Hamilton Tiger-Cats -- on March 13, the league announced Thursday.

Hockey is returning to the University of Alaska Anchorage after donors, including the NHL's newest team, raised over $3 million after the program was eliminated.

"It's a great day to be a Seawolf," UAA chancellor Sean Parnell said Tuesday when announcing the team would return to the ice for the 2022-23 season. "It's our day to celebrate the reinstatement of the program."

Tom Dundon is now sole owner of the Carolina Hurricanes after buying out the remaining shares of the NHL club held by Peter Karmanos and others.

The league's board of governors unanimously approved the transaction Wednesday.

"We are fortunate to have a passionate fan base that supports what we believe is a team that can compete every year for the Stanley Cup," Dundon said. "That is the only option."

In the midst of the New York Islanders' second straight trip to the semifinal round of the Stanley Cup playoffs and nearly 4½ months before the opening of their new arena, season tickets for the first season in their new home are sold out. 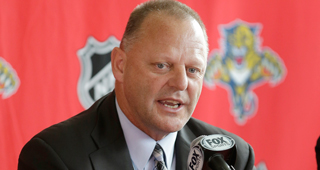 The victory capped a memorable comeback, even for a nation with as rich a history in hockey as Canada. Coach Gerard Gallant's team dropped its first three games of the tournament before it recovered en route to the title.

Tyson Jost scored two of Colorado's five second-period goals as the Avalanche clinched the West Division and the top overall seed in the NHL playoffs with a 5-1 win over the Los Angeles Kings on Thursday night.

Colorado and Vegas both finished with 82 points, but the Avs earned the division crown and the Presidents' Trophy -- awarded to the team with the best regular-season mark -- due to more regulation wins.

In a preview of what could be a marquee matchup in the postseason's first round, Mitch Marner scored his 20th goal of the season as the Toronto Maple Leafs outlasted the rival Montreal Canadiens 3-2 on Saturday night.

With the victory, Toronto clinched the North Division title, its first division crown since 2000, and kept itself in line for an 80-point season. The Maple Leafs have 76 with two games left.

Flyers Earn No. 1 Seed In The Eastern Conference

Golden Knights Grab No. 1 Seed In The West

Michael Friisdahl calls it a "reimagination" of the Toronto venue that opened in February 1999.

The NHL released the 2019-20 schedule Tuesday, with the Blues to host the Capitals on October 2.

The Coyotes will have a new majority owner in Alex Meruelo who takes over for Andrew Barroway.

The Blues beat the Bruins 4-1 in Wednesday's Game y in Boston.