Anaheim Ducks goalie Ryan Miller is retiring at the conclusion of this NHL season, ending a career that included a star-making run in the 2010 Winter Olympics for Team USA.

Miller, 40, has played 794 games in the NHL with the Buffalo Sabres, St. Louis Blues, Vancouver Canucks and the Ducks, with whom he has spent the past four seasons.

Chicago Blackhawks veteran forward Andrew Shaw is retiring from the NHL after doctors "highly recommended" he stop playing to care for his long-term health after several concussions. 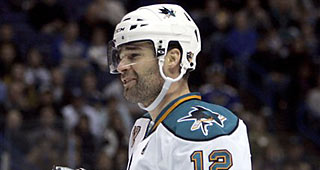 San Jose Sharks forward Patrick Marleau played in his 1,768th career game on Monday night at the Vegas Golden Knights, breaking Hall of Famer Gordie Howe's record for the most in NHL history.

Marleau, 41, began his career with San Jose in the 1997-98 season. Marleau set the games played record in 23 seasons.

Auston Matthews scored three times to increase his NHL-leading goals total to 31; Jack Campbell made 27 saves to set an NHL record for consecutive victories to start a season and the Toronto Maple Leafs outlasted the Ottawa Senators 6-5 on Saturday night.

Campbell became the first goalie with a victory in each of his first 11 appearances as the first-place Maple Leafs continued their dominance over the rest of the North Division.

Alex Ovechkin moved into a second-place tie on the all-time list for NHL power-play goals and the Washington Capitals beat the New Jersey Devils 5-4 on Sunday, completing a sweep of their eight-game season series. 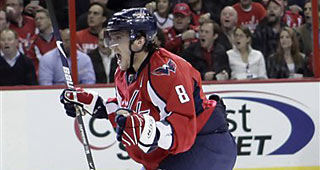 Alex Ovechkin took sole possession of sixth place on the NHL's career goal list in the most Alex Ovechkin way possible: ripping a one-timer past a goaltender from just inside the faceoff circle on the power play ifor the Washington Capitals.

Ovechkin scored his 718th goal to pass Phil Esposito and became the second active player to record 1,300 points, vaulting the Capitals into first place in the East Division by beating the New York Islanders 3-1 Tuesday night. 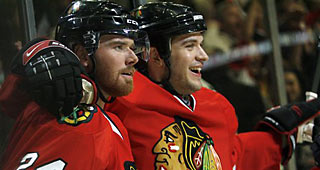 Chicago Blackhawks defenseman Brent Seabrook announced Friday that his NHL career is over after 15 seasons.

"After several surgeries, countless hours of rehab and training to get back on the ice at the level of my expectations, it will not be possible for me to continue playing hockey," Seabrook said in a statement Friday. "This is what is best for me and my family."

Patrick Kane scored his 400th NHL goal for the Chicago Blackhawks in a 7-2 win against the Detroit Red Wings at United Center on Sunday.

Kane dragged the puck around defenseman Filip Hronek before beating Thomas Greiss with a wrist shot for a 5-1 lead at 9:10 of the third period. Kane is the 100th player to score 400 NHL goals. 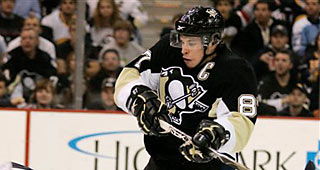 Sidney Crosby had two assists in his 1,000th NHL game to help the Pittsburgh Penguins defeat the New York Islanders 3-2 at PPG Paints Arena on Saturday.

"It means a lot," Crosby said. "It's a special day regardless of the outcome, but it makes it so much better when you win. Just everything from the guys and the ceremony in the room and on the ice, I was just completely spoiled today. It was a pretty awesome experience and a day I'll always remember."

Alexander Steen Retires Due To Back Injury

Matt Niskanen Retires With One Year Left On Contract

Jarome Ignila, Marian Hossa Among Those Elected To Hall Of Fame