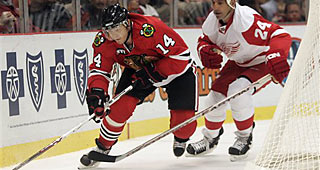 A day after Blackhawks' Coach Denis Savard pronounced that "there's no room" on the ice for underachieving forward Sergei Samsonov, it appears there's no room in the organization either for the veteran, who was officially placed on waivers. Samsonov most likely will clear waivers today since few teams would be willing to take on his $3.5 million salary and his lack of production, but Savard is hoping there is a taker. "I'm sure if someone picks him up, he'll be able to help them if he's put in the right spot," Savard said. Samsonov, the eighth overall choice by Boston in the 1997 draft, came to the Hawks from Montreal in exchange for Jassen Cullimore and Tony Salmelainen over the summer. The hope was he could regain his form of old and provide a veteran presence on a young Hawks team. After starting the season as a top-six forward, Samsonov's ice time quickly faded. He ended up playing in only 23 games, garnering a total of 4 points.