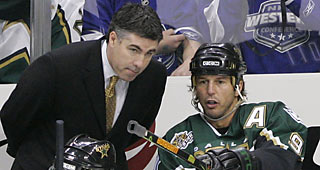 The Dallas Stars signed coach Dave Tippett on Friday to a one-year contract extension, through the end of the 2008-09 season. Tippett is 212-109-45 in five seasons, the best record among active coaches. The 46-year-old has led the Stars to two 50-win seasons. "Dave has done an outstanding job since the day he started here in Dallas and we expect that to continue," co-general manager Les Jackson said in a statement. Tippett's deal was set to expire in June. "Our goal of winning the Stanley Cup has not changed over the years and we'll continue to pursue that goal together," Tippett said in a statement.