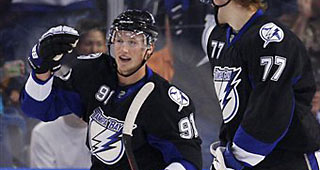 Steven Stamkos had an assist for his 1,000th career point, Nick Paul scored twice and the Tampa Bay Lightning beat the Philadelphia Flyers 4-1 on Thursday night.

The No. 1 overall pick in the 2008 draft, Stamkos assisted on Paul's second goal 7:55 into the second period that made it 2-0. Stamkos started the play with a pass behind the net to Ian Cole, who sent the puck in front to Paul.

"It's the most I celebrated a second assist in my career," he said. "I thought I'd make the safe play behind the net, and (Cole) made a great play."