Bruce Boudreau Will Return To Canucks Next Season 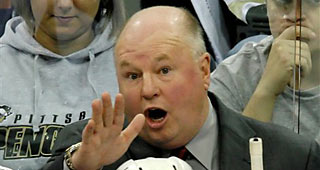 Bruce Boudreau will return to the Vancouver Canucks next season, ending speculation that the team and its veteran coach might part ways in the offseason.

"We are pleased to see Bruce's commitment to return to the Canucks next season," general manager Patrik Allvin said. "He has done a great job since arriving in Vancouver and we are eager to see the team continue to perform under his leadership as they did during the second half of the season."