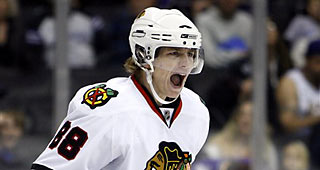 Patrick Kane said he has been working through an unspecified issue that has been bothering the Chicago Blackhawks forward since before the 2020 Stanley Cup Playoffs.

"It's something that I worked on all summer, so it's been, I don't want to say frustrating, but it's been like nagging me a little bit," Kane said at the NHL/NHLPA Player Media Tour on Thursday. "We're at the point now where I think it's finally starting to turn the corner and seeing some progress."