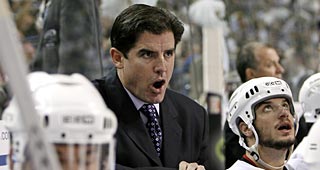 The Nashville Predators have fired Peter Laviolette as head coach.

No interim coach or new head coach was immediately named.

"Under the leadership of Peter and Kevin, our organization reached unprecedented heights -- from our franchise-altering run to the Stanley Cup Final to a Presidents' Trophy and our first two Central Division titles," GM David Poile said in a statement. "Their passion for the game, ability to motivate a team and drive to be the best makes this a difficult decision. On behalf of the entire organization, I would like to thank Peter and Kevin for all their contributions to the Nashville Predators over the past five-and-a-half seasons."