What's Going On With The Rangers? 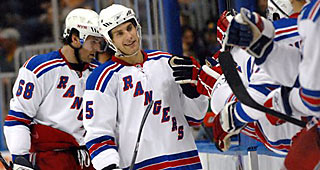 The New York Rangers currently sit in second place in the Metropolitan Division behind the red-hot Washington Capitals, and are tied with the Islanders and Red Wings for third in the Eastern Conference. While that seems like they are in a fine position, they have slid significantly over the past month and half.

For the first two months of the season, the Rangers had a record of 17-6-2, while from December up until most recently they have a record of 6-8-3. The slide should be a cause for concern as it was the classic case of poor possession team with fantastic goaltending that helped them with that strong start. During that strong start, the Rangers goaltending combination of Henrik Lundqvist and Antti Raanta had posted a team SV% of 95.1, which is great but very unsustainable. To go with that, they were also shooting 10.3%, combined for a 105.4 PDO so everything was going right for the team in that streak. The signs were there that they were bound for pretty significant regression especially when you look at their 6th worst score-adjusted possession numbers in the league at that time which was around  47.5%. In the 17 games since December 2nd, the goaltending has slowed down significantly with a league worst 90.2 SV%, while the shooting percentages have stayed relatively high. The possession numbers have improved since going up to around 50% score-adjusted corsi which is right around league average. What exactly is giving this team problems?

The defense has been bad, starting with the two highest paid defensemen on the team. That’s not to say there isn't good there, but it is significantly overshadowed by the bad. Dan Girardi has quickly joined the list of the worst contracts in the league. There has always been this “defensive defenseman” tag attached to Girardi but he sure isn’t very good at defense.

It’s very obvious by looking at his corsi that Girardi has been on a sharp decline over the past few years, and really isn't worth the $5.5 million cap hit that he carries. This season alone (at 5v5) Girardi is a -9.91% corsi relative, and -8.21% scoring chance relative. This is the man who the Rangers chose to keep instead of  top-pairing defenseman in Tampa Bay, Anton Stralman.

McDonagh is such a good defenseman, who has the misfortune of being dragged down by Dan Girardi, as does every other defense partner he has. He plays fairly well with Yandle, not getting tough starts and too many minutes, and if he is playing that is his ideal partner. The pieces are there for a good defense, with strong players like Ryan McDonagh, Keith Yandle, Dan Boyle, Dylan Mcilrath, Kevin Klein and to a lesser not as extreme as girardi degree, Marc Staal. The pairings should be McDonagh and Klein as the top shutdown pair, Mcilrath and Yandle getting the second pairing duties, while Dan Boyle and Staal get a lighter workload. Its been surprising to see how effective rookie Dylan Mcilrath has been, and he has quickly dispelled the stereo type of the type of player he once was. When Mcilrath was drafted he was known for that fighting and hitting style of play, but he now is a positionally strong defenseman who is large, mean, and can exit the zone with ease. Not being a strong skater hurts him, but it is much improved even after suffering a major knee injury. The team should likely move on from Girardi if there is any interest in him because if he is this bad now, I can’t even imagine him during the last four years of his contract. Defense is now about mobility and being an effective puck mover, as well as  positional play and being able to exit your zone in an effective manor. With how cheap Mcilrath is this year and can be for  years beyond, it is imperative to try and move Girardi ASAP. Also lost in all this is the uncertainty of Keith Yandle beyond this year for the Rangers. It cannot go unnoticed how very good he has been this year, posting positive possession with every one of his defense partners this year. He produces points at a rate that is among the elite among NHL defenseman (5v5, 200 min. minimum)

It would be nothing short of a disaster for the team to lost the best puck moving offensive defenseman they have had since Brian Leetch. They need to get him signed and if he wants to test the open market then it would probably be best to move him at the deadline, unless there is realistic hope of getting to the finals. It should go without saying that if they lose him, that defense takes an even more devastating hit. Thats the other minus of having Girardi signed to that awful deal, it prevents you from keeping or signing actual help to the team.

While the defense is responsible for a large portion of the blame, the forwards situations need to get figure out by coach Alain Vigneault. The top six has been a question mark, but probably an easier fix than the defensive issues. The difference is they have the personnel to make it work, but it wouldn't hurt to have another top-six winger. The lines currently are:

The first line has been fine all year, posting around 48% at both possession and scoring chances. Not exactly what you want to be generating with that type of talent. Outside of this line, which has played 386 minutes at even strength together, there hasn’t been much continuity in any of the lines. Hayes, who has drawn the ire of Coach AV, has been bounced around the lineup trying to find a combination that best suits him. He hasn't played particularly well but certainly not as bad as the head coach makes it seem when his even strength numbers are very similar to first line center Derrick Brassard. In almost 1700 even strength minutes together posting strong possession numbers, it seems as Derek Stepan and Chris Kreider should be playing together. Do you put JT Miller, who's played well with them, on a line, or do you put miller on the first line with swapping out one of the wingers? The Rangers surely hoped their top forward prospect Pavel Buchnevich was able to come over this and possibly fill a spot, but his most recent trade to SKA Saint Petersburg will most likely block that from happening since that team in most likely headed for a playoff birth.

Now what about the bottom six? Surely the moves up top affect who is in the bottom six, but the team should find some alternatives to Tanner Glass. Glass, who was already waived once this year, has player better recently on the line but still is arguably the worst player in the NHL. Dominic Moore has had struggles with his share of different linemates this year but should probably be given a little more help.

Is that the answer? Glass shouldn’t be in the lineup and team should seek out a top 9 forward that can help the depth lines contribute. It can be a bit of a mess with guys out position and not with strong enough linemates. I would love to see a fourth line of Moore, Fast, and Lindberg bother teams with strong skating and defensive play,  but moving Fast/Lindberg out of a top 9 spot means its either Megna/Glass/AHLer filling in which is less than ideal. An interesting fit for the Rangers could be an addition of Radim Vrbata from the Vancouver Canucks. It would be a rental being that he's a UFA, and you can ask for the Canucks to retain a bit of the salary. It would be a very solid addition for a player who can theoretically play in any of the top 3 lines for the team.

The goaltending is the only truly sure thing for this team, as Henrik Lundqvist remains one of the games elite goaltenders. Lundqvist is 34 years old now, but will continue to give his team a fighting chance as he remains in net.

The Rangers were a bit of a smokescreen and are not as good as they were at the beginning of the season, but also probably a playoff team. The problems they have are fixable but unlikely to happen with Girardi most likely not being traded. The team can return to the playoffs and even make a push towards the Stanley Cup again, but it will take some big changes. Lundqvist has willed this team to the playoffs before, and I’m sure he can do it again. It would be a lot easier for the team if he was given the proper help.