Grading The Deal: Pens Get Neal, Niskanen For Goligoski 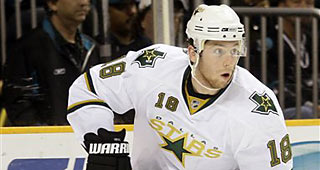 An extremely busy trading season continued Monday when the Pittsburgh Penguins dealt defenseman Alex Goligoski to the Dallas Stars for forward James Neal and defenseman Matt Niskanen. Pens GM Ray Shero has an annual need for wingers, especially ones that can play on a top forward line with either Sidney Crosby or Evgeni Malkin. The addition of Neal will provide a big upgrade to the current crop of wingers at their disposal, and should reap long-term benefits for the club, as Neal is only 23-years-old. Neal is in his third NHL season, and has eclipsed the 20-goal mark in all three, including 21 goals through the first 59 games this year. He improved from 37 points as a rookie to 55 as a sophomore, and has 39 points so far this season. In addition, he has vastly improved his defensive play, jumping from a -5 to a +8. A second round pick in 2005, the 6?2? left winger is signed through next season at a $2.875 cap hit, after which he is a restricted free agent. Not yet in his prime, Neal could easily be considered a 35-goal scorer, especially playing alongside Crosby or Malkin. With both injured, goals haven?t been easy to come by over the last month, and Neal should be able to help the Pens avoid collapsing before the playoffs. In Niskanen, the Pens get a former first round pick who had fallen out of favor with coach Marc Crawford. After a career-high 35 points in 2008-09 as a sophomore when averaged 20 minutes of ice time, Niskanen has dropped all the way to averaging 15:44 this season. With Pittsburgh already employing Kris Letang, Brooks Orpik, Paul Martin and Zbynek Michalek, Niskanen should be able to transition seamlessly into the lineup as a third-pairing defenseman while he gets acclimated to his new team. The 24-year-old American, taken 28th in 2005, carries a $1.5M cap hit through next season and still holds the upside of a second-pairing defenseman. Grade for Pittsburgh: A+ In an uncharacteristic move, Stars? GM Joe Nieuwendyk bought high, very high, on Goligoski. While a good two-way defenseman with good puck-moving ability, Goligoski doesn?t have the skills to be a number one defenseman, but a very solid number two. Will he greatly improve the power play? Yes. Is he an upgrade over Niskanen? Yes, Goligoski is a top-pairing defenseman. But the price they paid to get him is over-and-above his worth, in my humble opinion. If the deal was just Neal-for-Goligoski, I would say that it was fairer, with Pittsburgh still coming out slightly ahead. And I do understand the need for quality puck-movers in the post-lockout-NHL, but this is an overpayment. Goligoski is talented, in no way am I meaning to demean his abilities; he has 31 points and a +20 rating in 60 games this season. Last season he had 37 points in 69 games, and has 10 points in 15 career playoff games. The trade will also allow Stephane Robidas to slide into a more-comfortable number two role on the back-end. Just like the other two players in the deal, Goligoski is signed through next season and has a cap hit of $1.833M. No doubt a portion of this deal is financially related as the Stars are seeking new ownership, are working on a tight payroll, and are exploring the possibility of signing Brad Richards to an extension. That extension is unlikely though until a new owner is found, and Goligoski being the oldest player in the deal (25-years-old) and approaching unrestricted free agency sooner than the other two can only be a negative. While Goligoski has spent his career as the third-best offensive-defenseman on his team (whether behind Sergei Gonchar and Letang, or Letang and Martin), it?s entirely possible that he excels in a more prominent role. But 50 points in 96 AHL games show me he doesn?t possess dominant offensive traits and thus is just an upgrade over Robidas, but not enough to warrant the cost paid. While the Stars were dealing from an area of strength at the wing (also having Brenden Morrow, All-Star Loui Eriksson, and Jamie Benn), I think this deal would have looked fairer with Benn going the other way instead of Neal. Pittsburgh has improved themselves with this trade far more than Dallas has. Grade for Dallas: C+ Nick is RealGM?s NHL Feature Writer. You can reach him by email nick.obergan@realgm.com or on twitter @NickObergan