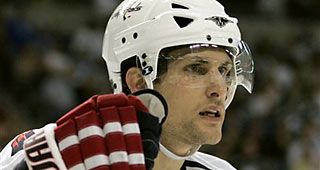 Brian Pothier, who hasn?t played for more than a year because of vision problems resulting from a concussion, was recalled from the minors by the Capitals on Sunday, according to an Associated Press report. The defenseman suffered a concussion in a game at Boston on January 3, 2008, and had headaches and dizziness for nearly a year, putting his career in doubt. Finally, in December, he was diagnosed with a stigmatism in his eye and was fitted with glasses, and that?s made all the difference. ?It?s been a long time coming,? Pothier told reporters in a conference call from Atlanta, where the Capitals play the Thrashers on Monday.