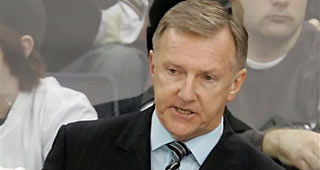 The Toronto Maple Leafs announced Tuesday that Ron Wilson has been named the 27th head coach in the club?s history. Wilson previously held the NHL head coaching duties with Anaheim, Washington, and most recently San Jose for parts of the past five seasons. ?Ron has a very proven track record in this league,? said Cliff Fletcher, general manager of the Maple Leafs. ?He is an innovative coach that consistently gets his team to perform at a high level. He works exceptionally well with both young players and all-star caliber veterans. We look forward to having Ron?s vast coaching expertise and knowledge as we look to bring a new culture to our hockey club.?