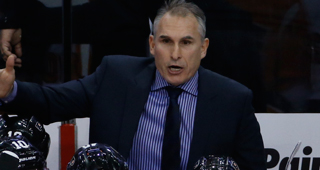 Craig Berube will remain coach of the St. Louis Blues, and it's the job of the players to turn things around, general manager Doug Armstrong said Tuesday.

Berube, in his fifth season with the Blues, is 159-85-36. St. Louis made the Stanley Cup Playoffs each of his first four seasons and won the Stanley Cup in 2019. He is in the first season of a three-year contract he signed Feb. 9.