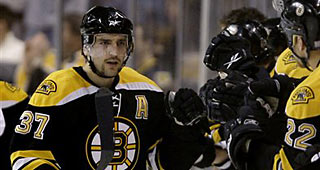 The Boston Bruins are getting the gang back together, signing captain Patrice Bergeron and David Krejci -- two members of their 2011 Stanley Cup championship team -- to one-year deals on Monday.

Almost three months after he left the ice without any certainty that he would return, Bergeron signed a one-year deal with the Bruins. A few hours later, the team announced that Krejci, who played last season in his native Czechia, will also be back in 2022-23.

Bergeron got a $2.5 million deal with $2.5 million in incentives and Krejci gets $1 million with the potential for $2 million more.