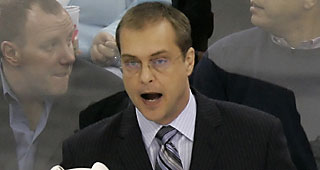 Paul Maurice's journey toward becoming the new coach of the Panthers included a fortuitous flick of the remote control, plus was aided by a college admissions department.

He was watching games one night in January, a month or so after he stepped aside as coach of the Jets. He stumbled upon the Panthers and quickly told his wife that he was intrigued by their club.

Fast-forward a few weeks, and Maurice's son got admitted to the University of Miami. It was another sign.

The Panthers hope he's right. Maurice was introduced Thursday as Florida's new coach, with the team emphasizing it found in a monthlong search that his experience makes him the right fit.

"When we spoke to Paul Maurice, it was overwhelming that this was the man to be a real fit," said Panthers GM Bill Zito. "He was the fit to take us into the challenges that are ahead of us moving forward, as we move forward to ultimately what our goal is."