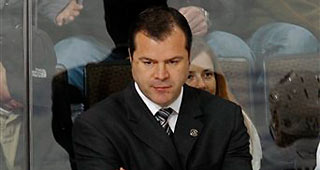 Vigneault was in his third year of a five-year deal that paid him $5 million annually, per sources.

The news comes after the Flyers got embarrassed by the Lightning at home 7-1 on Sunday, extending Philadelphia's losing streak to eight games (0-6-2). The Flyers have the second-worst record in the Metropolitan Division through 22 games at 8-10-4.