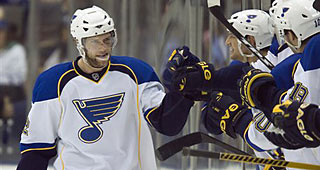 David Backes retired from the NHL on Wednesday after signing a one-day contract with the Blues.