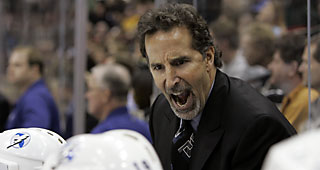 John Tortorella was hired as a studio analyst Wednesday for ESPN's coverage of the NHL beginning this season.

The 63-year-old coached the Columbus Blue Jackets for six seasons until it was announced May 10 that he would not return. His 673 wins in 20 seasons with the Tampa Bay Lightning, New York Rangers, Vancouver Canucks and Blue Jackets are tied with Peter Laviolette for the most by a United States-born coach in NHL history.