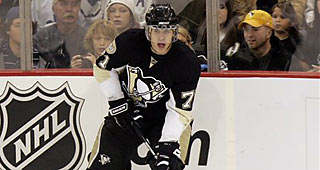 Evgeni Malkin left the Pittsburgh Penguins game against the Boston Bruins with a lower-body injury at PPG Paints Arena on Tuesday.

The center took a hit in the corner from Bruins defenseman Jarred Tinordi at 6:42 of the first period. Malkin remained on the bench before going to the locker room but returned to the bench at 12:29.

He participated in a power play that began at 13:13 of the first before leaving a second time. He did not play the remainder of Pittsburgh's 2-1 loss.

Penguins coach Mike Sullivan said Malkin was being evaluated but they had no other information.