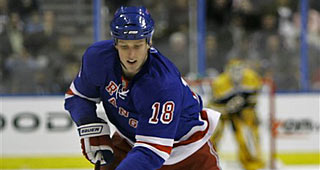 The draft pick is in 2021. The 33-year-old Staal had two goals and nine assists in 52 games this past season. He has played his whole 13-season NHL career so far with the Rangers.

"Marc Staal has been an exemplary hockey player, teammate and person from the moment he joined the New York Rangers organization," Rangers President John Davidson said. "A consummate professional, Marc's perseverance and dedication to the game made him such an integral part of our organization."