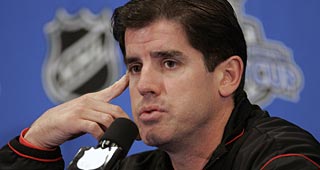 Peter Laviolette has been named the new coach of the Washington Capitals, the team announced Tuesday.

Laviolette's deal is believed to be for three years, a source told ESPN.

Laviolette, 55, has 18 years of experience as a head coach and ranks 16th in all-time wins with a career record of 637-425-123. Laviolette won a Stanley Cup with the Hurricanes in 2006 and most recently coached the Predators, but was fired in January after five and a half seasons with the team. Laviolette also led the 2010 Flyers and 2017 Predators to the Stanley Cup Final.