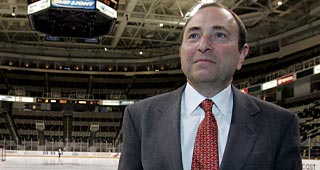 NHL commissioner Gary Bettman discussed a potential four-arena plan for a season restart, a draft held before the season is completed and fans returning to games during a wide-ranging interview with Sportsnet on Wednesday.

"Anything we're considering doing starts with health and well-being, whether it's the players or other personnel or fans or the community at large. Everybody is going through a tough time," Bettman told Ron MacLean on "In Conversation."