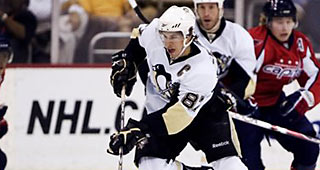 Pittsburgh Penguins star Sidney Crosby underwent surgery for a core muscle injury Thursday and is out at least six weeks, the team announced.

General manager Jim Rutherford said the surgery was performed by Dr. William Meyers of the Vincera Institute in Philadelphia. The team said in a statement that Crosby has been dealing with a sports hernia since training camp.