Penguins To Be Without Evgeni Malkin Indefinitely 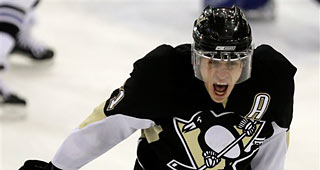 The Pittsburgh Penguins will be without star center Evgeni Malkin "longer term" because of a lower body injury, coach Mike Sullivan announced on Monday. The coach said that Malkin's season is not in jeopardy.

The 33-year-old Malkin left the second period of Pittsburgh's 7-2 win over Columbus on Saturday after taking a hit to the boards while in an awkward position.