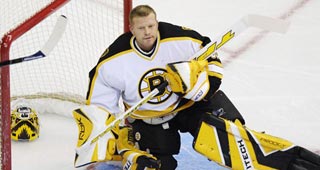 Controversial former NHL star Tim Thomas offered his first public comments in several years on Wednesday, after being named to the U.S. Hockey Hall of Fame.

"Everybody probably knows nowadays I don't have that much to say, at least publicly," said Thomas, the former Boston Bruins goalie who stepped away from public life after his final NHL season in 2013-14. "I've decided to keep whatever I've been doing in my life to myself, probably forever."