Pavel Datsyuk To Stay In Russia 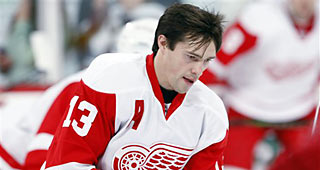 Pavel Datsyuk has signed for his hometown Russian club in the Kontinental Hockey League, ending speculation of a possible return to the NHL.

The 40-year-old center has signed a one-year deal with Avtomobilist Yekaterinburg, the successor to the team where he began his pro career in the 1996-97 season.