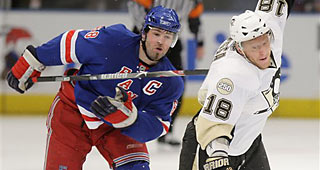 Jaromir Jagr cleared waivers and has been assigned to HC Kladno of the Czech 1 Liga in the Czech Republic, the Flames announced Monday.

"Jaromir's career speaks for itself," Flames GM Brad Treliving said in a news release. "He is a legend in our sport and we are very appreciative that he selected Calgary to pursue his career in the NHL. Regretfully, with a late start to his season combined with nagging injuries, he wasn't in a position to perform at the level both he and our team had hoped.

"During his short time in Calgary, Jaromir demonstrated tremendous leadership and professionalism, especially with our young players. We thank him for his contributions to our group both on and off the ice."