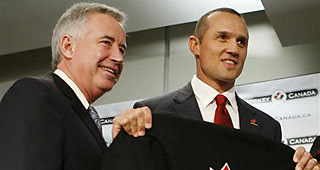 The Lightning have signed defenseman Jean-Pilippe Cote to a two-year contract today, vice president and GM Steve Yzerman announced.  Cote has been recalled to Tampa Bay and will wear No. 60.

Cote has played in 19 games with the Crunch this season, notching two goals and nine points.  He leads all Crunch players with a plus-6 rating and is tied for second among team defensemen for goals.  He has played in 535 career AHL games with Syracuse, the Norfolk Admirals, Wilkes-Barre/Scranton Penguins and the Hamilton Bulldogs, registering 20 goals and 107 points.

Cote was drafted by the Maple Leafs in the ninth round, 265th overall, in the 2000 NHL Entry Draft.  He has played in eight career NHL games with the Canadiens during the 2005-06 season.