The New York Rangers have agreed to terms with defenseman Ben Harpur on a two-year, $1.57 million contract extension through the 2024-25 season.

General manager Chris Drury announced the deal on Thursday for the 28-year-old who started the season with Hartford (AHL).

The New York Rangers signed forward Jimmy Vesey to a two-year extension through the 2024-25 season, the team announced Wednesday. According to sources, the annual average value of the contract is $800,000, which the Rangers feel gives them flexibility to shape their roster among uncertainty over next year's salary cap.

The New York Rangers traded enforcer Ryan Reaves to the Minnesota Wild on Wednesday for a 2025 fifth-round pick.

Reaves had been a healthy scratch for eight of the past 12 games for the Rangers. He gives struggling Minnesota some extra muscle and a veteran presence.

The Chicago Blackhawks claimed defenseman Jarred Tinordi off waivers from the New York Rangers on Monday. 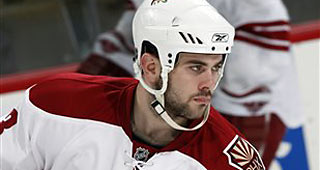 Veteran defenseman Keith Yandle said Tuesday he is retiring after 16 seasons in the NHL.

Yandle became the NHL's all-time Iron Man last season, extending his consecutive-games streak to 989 before the Philadelphia Flyers scratched him late in the year.

Jacob Trouba was named captain of the New York Rangers on Tuesday.
He is the 28th player to be named captain in Rangers history. Mark Messier held the position twice, from 1991-97 and again from 2000-04.

"It's a huge honor and something that means something, especially here in this organization with the history and the past players that have been captain before me," Trouba said. "As a kid I grew up watching [Brian] Leetch and Messier, [Chris] Drury and [Jaromir] Jagr. ... You come here and you learn more about the history of the guys that were before them. You see pictures, you see jerseys around this place.

"It's now my turn to carry that legacy on for those guys."

The 28-year-old defenseman is the Rangers' first captain in more than four years, since defenseman Ryan McDonagh, who was traded to the Tampa Bay Lightning on Feb. 26, 2018.

The New York Rangers have agreed to terms with forward Kaapo Kakko on a two-year contract worth $4.2 million.

The deal with the No. 2 pick in the 2019 draft carries an annual salary cap hit of $2.1 million. General manager Chris Drury announced the agreement Thursday.

The Sharks announced Tuesday that Quinn would replace the fired Bob Boughner as the Sharks overhaul their management and coaching team.

"His previous NHL head coaching experience is valuable to us and he implements a system that will fit with our philosophy of being a hard team to play against," general manager Mike Grier said in a statement. "We are extremely happy to have him a part of this organization."

The Anaheim Ducks on Wednesday signed center Ryan Strome, who is coming off a breakout season with the New York Rangers, to a five-year contract.

Strome's toughness was on display in the postseason this year, when he routinely tried to play injured as the Rangers won two series before bowing out in the Eastern Conference Finals to the Tampa Bay Lightning.

The Colorado Avalanche acquired goalie Alexandar Georgiev from the New York Rangers for three NHL draft picks, as the Stanley Cup champions reshuffle their goaltending for next season.

The Rangers added the Avalanche's 2022 third-round (97th overall) and fifth-round (161st overall) picks, as well as a third-round pick in the 2023 NHL draft.

Brayden Point Could Return For Game 6

Brayden Point Could Play In Game 5

Lightning Beat Rangers 4-1 To Even Series

Brayden Point Out For Game 4 Of Eastern Finals

Rangers Beat Hurricanes In Game 4 To Even Series