Hockey Hall of Famer Bobby Hull, a 12-time All-Star and two-time Hart Trophy winner, has died, the Chicago Blackhawks announced Monday. He was 84.

"We send our deepest sympathies to the Hull family," the team said in a statement. "The Hull family has requested privacy during this difficult time. They appreciate the sympathies that have been sent their way." 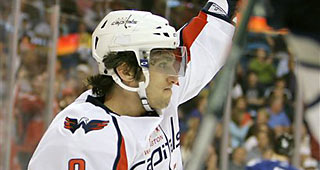 He also became the first to do it with a single franchise, and it came as part of a hat trick performance in a 7-3 victory over the Blackhawks in Chicago.

"This ... it's huge. It's huge for hockey, it's huge for the organization," a drained Ovechkin told his teammates in the locker room after the win. "And to do it with you guys, it's special."

David Pastrnak scored twice, part of a dominant effort that ended with four consecutive goals to conclude the scoring as the Boston Bruins defeated the Chicago Blackhawks 6-1 on Saturday night.

The win allowed the Bruins to tie an NHL record with 11th straight home victories to start the season, matching a mark reached by the Florida Panthers last season, and the Blackhawks in 1963-64. 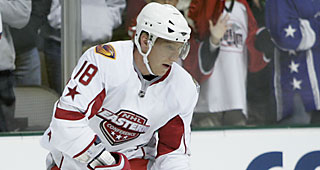 Marian Hossa isn't exactly sure how he will feel when the Chicago Blackhawks retire his No. 81 jersey.

The Hockey Hall of Famer is certain he is going to watch some more numbers from his championship teams in Chicago go up to the United Center rafters some day.

"There's so many names [that] deserve it to be up there," Hossa said Wednesday night. "It's not up to me, but I know I will be coming back for some others in the future."

Chicago Blackhawks forward Tyler Johnson has been placed on injured reserve with an ankle injury.

Johnson has been off to a great start with two goals and four assists in six games for a Chicago team that has surprisingly won four straight games.

The Montreal Canadiens acquired defenseman Nicolas Beaudin from the Chicago Blackhawks in exchange for center Cam Hillis on Wednesday.

Beaudin had two goals and four assists in 22 games over three seasons for Chicago. The player from Quebec was the 27th overall pick in the 2018 draft.

The Chicago Blackhawks claimed defenseman Jarred Tinordi off waivers from the New York Rangers on Monday.

The Vancouver Canucks acquired defenseman Riley Stillman from the Chicago Blackhawks on Friday for center Jason Dickinson and a 2024 second-round draft pick. 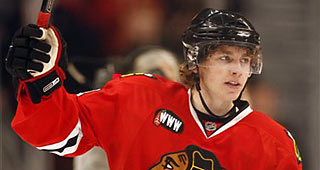 "It was all just rumors," Kane said on Thursday from Chicago's training camp media availability. "A lot of the rumors are just rumors, maybe people looking for things to talk about in August when nothing's really going on with hockey, right? I don't think there have been any legitimate discussions between other teams and the Blackhawks."

The 33-year-old is entering the final season of his eight-year, $84 million contract, right as Chicago is knee-deep in a rebuild that could go on for years.