The NHL All-Star Game and All-Star Skills competition will be held at FLA Live Arena, home of the Florida Panthers, in Sunrise, Fla, on Feb. 3-4. The All-Star Game will once again feature a 3-on-3 tournament between 11-player teams representing the league's four divisions.

Boston Bruins captain Patrice Bergeron said the team has discussed resting him for regular-season games even if he's healthy enough to play.

"It's something they've talked about. I told them that those are decisions they have to make, if that's what they want. If you leave it up to me ... obviously I want to play, as a competitor," said Bergeron.

The home of the Boston Celtics and Boston Bruins will be known as the TD Garden through 2045.

TD Bank and the building's owner, Delaware North, announced a 20-year extension for the arena naming rights on Thursday. The agreement, which began in 2005, had been set to expire in 2025. 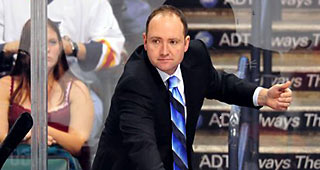 They were chosen because each of their teams is atop the division at the midway point of the season. The league announced the All-Star coaches Wednesday, less than a week after revealing the first 32 players picked for the Feb. 3-4 event in Sunrise, Florida.

Jake DeBrusk's starring role at the Winter Classic has proved costly, with the Boston Bruins putting the forward on long-term injured reserve Thursday.

The team announced that DeBrusk suffered hand and lower-body injuries in the 2-1 win over the Penguins at Fenway Park on Monday. He scored both of Boston's goals in the third period, including the game winner with about two minutes to go.

He must miss a minimum of 10 games and 24 days of the season on LTIR. The team said his recovery time is four weeks.

The Boston Bruins revealed findings and subsequent procedural changes on Thursday from an independent review conducted on their signing of Mitchell Miller.

That investigation, led by former U.S. Attorney General Loretta Lynch of the law firm Paul, Weiss, Rifkind, Wharton & Garrison, parsed through thousands of documents related to Boston's signing of Miller on Nov. 4 before the club cut ties with him days later.

The Bruins' release detailed what new policies the club will adopt, while also stating that there was no misconduct by Boston's employees in initially vetting Miller.

Lawson Crouse scored his second goal with 13.5 seconds left in the third period and the Arizona Coyotes returned home to end a 19-game losing streak to the Boston Bruins with a 4-3 victory Friday night.

It was the second-longest win streak against a single opponent in NHL history. The Canadiens won 23 straight against the Capitals from 1974-78.

The Vegas Golden Knights made former Boston coach Bruce Cassidy's return a success, as Reilly Smith scored in the fifth round of the shootout to beat the Bruins 4-3 and end their NHL record for home victories to open a season at 14 games Monday night.

Taylor Hall scored twice and the Boston Bruins extended their NHL-record streak of home victories to open a season to 13 games with a 3-1 victory over the Tampa Bay Lightning on Tuesday night.

Brad Marchand Returns To Bruins Ahead Of Schedule

Brad Marchand Set To Skate For First Time Since Surgery