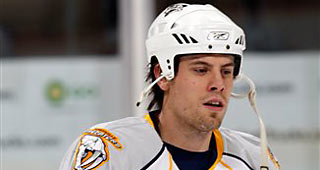 The Vegas Golden Knights traded forward Evgenii Dadonov to the Montreal Canadiens on Thursday in exchange for Shea Weber's contract.

There was no salary retained in the deal.

The Buffalo Sabres acquired goalie Ben Bishop in a trade with the Dallas Stars on Friday in a salary cap-related paperwork move involving a veteran who is not expected to play again because of degenerative right knee injury.

The Sabres add the final year of Bishop's contract, which represents nearly a $5 million cap hit to boost their payroll closer to the NHL's $60 million minimum.

The Jackets traded Domi, 27, to the Panthers along with a 2022 sixth-round pick that was originally owned by the Toronto Maple Leafs. In exchange, the Panthers sent NCAA fifth-year senior defenseman Tyler Inamoto of Wisconsin to Columbus, which retained 50% of Domi's $5.3 million cap hit.

The New York Rangers have shored up their blueline for the stretch run, reportedly trading for Philadelphia Flyers defenseman Justin Braun.

Philly gets a third-round draft pick in 2023.

Leddy is in the final season of a seven-year deal, with an annual average value of $5.5 million.

The Washington Capitals acquired forward Marcus Johansson from Seattle on Monday in exchange for forward Daniel Sprong, a 2022 fourth-round draft pick and a 2023 sixth-round pick.

The Vancouver Canucks have traded veteran defenseman Travis Hamonic to the Ottawa Senators for a 2022 third-round draft pick.

Hamonic, 31, is a defensive-first player who had seven points in 24 games for the Canucks, averaging 18 minutes, 22 seconds in ice time per game.

The two-time defending Stanley Cup champion Tampa Bay Lightning made another trade on the eve of the deadline aimed at becoming the NHL's first team to win three titles in a row since the 1980s.

The Lightning acquired forward Nick Paul from the Ottawa Senators on Sunday night for Mathieu Joseph and a 2024 fourth-round pick.

Sabres Trade Jack Eichel To Vegas, Will Have Disk Replacement