The NHL is reevaluating a completed trade between the Vegas Golden Knights and Anaheim Ducks because it might violate forward Evgenii Dadonov's no-trade clause, sources confirmed to ESPN on Monday.

At the trade deadline, the Boston Bruins found a spark right under their noses -- signing forward Jake DeBrusk to a two-year extension with an annual cap hit of $4 million.

DeBrusk has had an up-and-down tenure with Boston, leading to trade rumors. 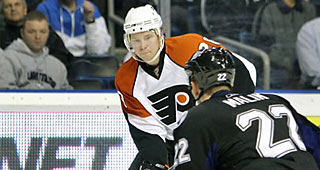 Philadelphia Flyers' captain Claude Giroux won't be going anywhere -- unless he wants to.

The club's general manager, Chuck Fletcher, made clear in his midseason media availability Wednesday that Giroux, a pending unrestricted free agent, will be moved ahead of the NHL's March trade deadline only if Giroux himself chooses to be.

Jake DeBrusk has requested a trade from the Boston Bruins, his agent confirmed to ESPN.

DeBrusk, 25, has played all five of his NHL seasons with the Bruins, tallying 70 goals and 70 assists in 261 games. Boston selected the left winger 14th overall in the 2015 NHL draft.

Vladimir Tarasenko could start the season with the St. Louis Blues despite the forward asking for a trade, coach Craig Berube said.

"I expect 'Vladi' to play for us," Berube told "The Cam & Strick Podcast" on Tuesday. "I'm going to treat him like every other player. And yeah, he asked to be traded, and things happen, but again, you know, we want Vladi to play good hockey for us. … He's going to have a role on the team like he always has, we'll deal with it internally and we'll go from there.

"You only can control so many things and there's things you can't control sometimes. So you just focus on what you can control. And that's what we're going to do."

Jack Eichel's representatives released a statement Friday night saying "the process is not working," deepening the rift between the Buffalo Sabres captain and the team.

In an email to The Associated Press, agents Peter Fish and Peter Donatelli contradicted general manager Kevyn Adams by saying the Sabres went against their own medical staff's recommendation in determining artificial disk replacement surgery was required to repair a herniated disk that sidelined the player for the final two months of the season.

The agents also wrote they fully anticipated Eichel would be traded before the start of the NHL's free agency period, which opened on Wednesday.

Star winger Vladimir Tarasenko has requested a trade from the St. Louis Blues, a source confirmed to ESPN on Wednesday.

Mitchell Marner will not be part of any potential roster changes the Toronto Maple Leafs will look at during the offseason, general manager Kyle Dubas said Wednesday.

The forward and Auston Matthews combined to score one goal, by Matthews, in Toronto's 4-3 elimination by the Montreal Canadiens in the Stanley Cup First Round.

Dubas defended both forwards and said disposing of players of their caliber because of a seven-game series would "be foolish."

"I understand the fans and they can feel any way they want, and media are entitled to feel any way that they want, but these are two awfully great players that showed it over the entire regular season," Dubas said.

Taylor Hall will not dress for the Buffalo Sabres in Tuesday's road game against the New Jersey Devils -- a sign the winger is likely on the move ahead of the April 12 trade deadline.

Buffalo interim coach Don Granato confirmed the move, saying 23-year-old Arttu Ruotsalainen could be ready to step up and make his NHL debut in Hall's absence.

The Carolina Hurricanes could look to trade one of their goalies for help in other areas ahead of the NHL Trade Deadline on April 12, general manager Don Waddell said in comments published by The Athletic on Friday

Alex Nedeljkovic and James Reimer have shared the goaltending since Petr Mrazek had surgery to repair a broken right thumb Feb. 3.

Sabres GM 'Open To Anything And Everything,' Including Trading Hall

Maple Leafs Looking To Be Active Prior To Trading Deadline

Maple Leafs Defenseman Nikita Zaitsev has asked for a trade for personal reasons, and the club is willing to oblige him.

Marcus Johansson is in the final season of a three-year deal with a cap hit of $4.583 million.

Vegas agreed to sign Mark Stone to a contract extension with an annual average of $9.5 million.

Gustav Nyquist is currently second on the Red Wings in scoring, with 49 points (16 goals, 33 assists) in 62 games.
Columbus Acquires Ryan Dzingel From Ottawa

Matt Duchene is joining his third team in two seasons.

Stars Get Jamie Oleksiak Back From Penguins

The Stars had traded Oleksiak to the Penguins last season, also for a fourth-round pick.

The Maple Leafs have acquired Jake Muzzin from the Kings in exchange for a first-round pick and two prospects.