The Maple Leafs announced Thursday that the club has claimed forward Frazer McLaren off waivers from the Sharks.

McLaren played in one game for San Jose this season. The Winnipeg, Manitoba native also played 26 games for the AHL’s Worcester Sharks collecting one assist and 87 penalty minutes.

In 40 career NHL games, all with San Jose, McLaren has registered one goal, five assists and 85 penalty minutes. San Jose originally selected McLaren in the seventh round, 203rd overall, in the 2007 Entry Draft.

He is expected to join the Leafs at practice Friday.

The Oilers have claimed goalie Niko Hovinen off waivers from the Flyers on Friday, according to an ESPN.com report.

The 24-year-old native of Finland played in 16 games this season with the Trenton Titans of the ECHL. 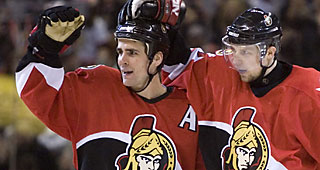 Wade Redden has been bought out by the Rangers, the team announced Thursday.

Due to completing the accelerated compliance buyout on Redden, the veteran defenseman  is now an unrestricted free agent.

A person familiar with the moves has told The AP that the Sabres have placed three players on waivers, including defenseman Adam Pardy. 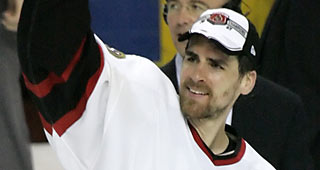 The Rangers have placed Wade Redden on waivers, a source confirmed to ESPNNewYork.com, clearing the way to cut ties with the 35-year-old and his six-year, $39M contract.

Assuming Redden clears waivers Thursday at noon ET, the Rangers plan to notify him and agent Don Meehan they will be using an accelerated compliance buyout on the two remaining years on his contract.  Redden would then become an unrestricted free agent.

Clune, 25, has seven points and 98 penalty minutes in 35 games with L.A.’s primary developmental affiliate, the Manchester Monarchs, in 2012-13. Since turning pro in 2006-07, the native of Toronto has appeared in 275 career AHL games, posting 75 points and 925 penalty minutes.