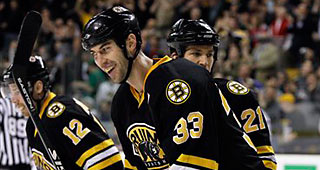 The Boston Bruins appear to be the consensus pick by many to win the Stanley Cup. The Rangers may be that one dark-horse team to win it all. My pick:  Bruins over Sharks in the finals.

1. Bruins – Appear to be ready to go the distance, but the Red Wings will be a tough first-round opponent.

2. Ducks – The club deserved the top-seed in the West.

3. Avs – Could be the surprise team this season.

5. Penguins – Getting healthy just in time.

6. Lightning – May have a major question in the goal.

8. Blues – Can they regain their winning ways in time to advance?

9. Kings – The lack of offense is a concern vs. Sharks.

10. Canadiens – Another team with offense concerns.

11. Wild – Bryzgalov has been very good in the goal.

12. Rangers – Good enough to be labeled a dark-horse contender.

13. Flyers – Made the playoffs after a slow start.

14. Blue Jackets – Can Ryan Johnson lead them out of the first-round?

15. Red Wings – Despite numerous injuries, the club is back in the hunt.

16. Stars – Their first playoff appearance in years may be short lived.